A lot of game suggestions had been suggested to the Official Diamond Hunt Discord, got a lot of support but was never implied to the game. This page shows a list of previously suggested features by type.

Note: DO NOT add suggestions here. They should be suggested to discord sever first. This page is for an overview of previous suggestions only.

Note 2: None of these are in the game. They are suggested and got supported by the community, but Smitty did not add them. Implied suggestions doesn't go into this page

Showing both virtual and real levels

Unlike Diamond Hunt Mobile, skill levels in Diamond Hunt 3 cap at 100. Obviously you can continue getting XP after that, levels after 100 ae known as virtual levels. In 2020/09/03, Smitty fixed a bug where you can continue leveling after level 100 (And they account to the global level back then, which created confusion).

Someone like virtual levels but some want levels to cap at 100, so this suggestion was proposed in which both are shown. something like

Suggested by AVAVV in 2020/08/16, this suggestion is to add 1/10/100 items hotkeys to the part where you can select 1/25%/50%/max items to use. It is sometimes annoying how you can only select a percentage in the hotkeys, especially for bones when you want to add an exact number to the bonemeal bin for farming.

Although being a useful idea and was ignored, no one seem to re-suggest this suggestion since then

Login presets are a thing in Diamond Hunt Mobile and Diamond Hunt 2, in which you can save login info when you login to different accounts, meaning that you don't have to type everything again to switch accounts.

As people started having multiple accounts (Alt trade are no allowed, so mainly people have multiple accounts because of having a standard account and a hardcore account), TheRealJeff in 2020/08/19 suggested that login presets should be a thing in Diamond Hunt 3 too.

There isn't much reason to deny that suggestion, but Smitty ignores it anyways.

Checking if the player can complete something before requesting it

In this game, it will not check if you have the ability to complete something before requesting it, and stuck you for a while, for example:

So in 2020/09/02, Mewtwo2387 suggested that a checking is required. It isn't that these issues mentioned above will affect gameplay a lot as they are early-game issues, but if this "no-checking" trend continues, it will for sure affect gameplay some day.

First suggested a long time ago for the previous DH games, then proposed again in 2020/09/17 by Mewtwo2387, this is a suggestion of turning the Research system into a tree, meaning that there are forks to choose instead of having to research perk by perk.

On the day, Mewtwo2387 made a brewing skill tree as a demo on how it will work:

Note that the suggested type of skill tree is the one that you can research both sides of the fork but not the one you have to choose.

Together with stew stacking and adding bones to castle loot table, this is one of the three highly supported suggestions in 2020/09/17, and all three was ignored. Changing the research system is hard anyways.

In 2020/10/20, shtos suggested that fishing researches need reworking, with the following points:

Adding 1/1 items to the loot table

Loot bags other than Forest and Caves doesn't have a 1/1 guaranteed item, meaning that they are sometimes empty. So in 2020/08/15, Stripper Steve suggested to put 1/1 items in all of them.

"Even if it's small, it's a much better feeling to get junk than to get "lootbag is empty". The small feeling of winning something is enough to keep people engaged longer."

In Late August 2020, Shtos for many times suggested a 'slayer' npc, that gives you a task to kill x amounts of a monster, after completing will get you some resources/coins/energy as a reward

Monsters on task could give 20% more xp or some other benefit, or you would get a higher chance to encounter a monster that you're tasked with.

"Slayer master: You would be able to take an easy, medium, hard task which would reward you 1, 2 or 3 slayer points, depending on the chosen difficulty. Difficulties would be unlocked with combat level. Difficulty would dictate strength of monsters you will be assigned with and amount of them you need to kill. You should also have a higher chance of meeting that monster if you're tasked with a specific monster.

You would get 10% more combat xp from monsters youre tasked to kill, they would also have 10% higher chance of droping their items. Monsters could be assigned either by zone or type or just specific monsters. You could only be assigned a monster that you killed at least 10 times or zone that you have 10 kills in it.

Possibly could introduce at some point boss tasks which would allow us to revisit old bosses, maybe their stronger versions? You would also be able to skip a task for a price of coins or slayer points. Tasks shouldn't have any cooldown, imo.

Also made some quick possible slayer points shop, it has lots of room to expand or adjust the prices, wanted the shop to be more combat oriented, didn't want to add any skilling resources to it."

Slayer shop made by Shtos: 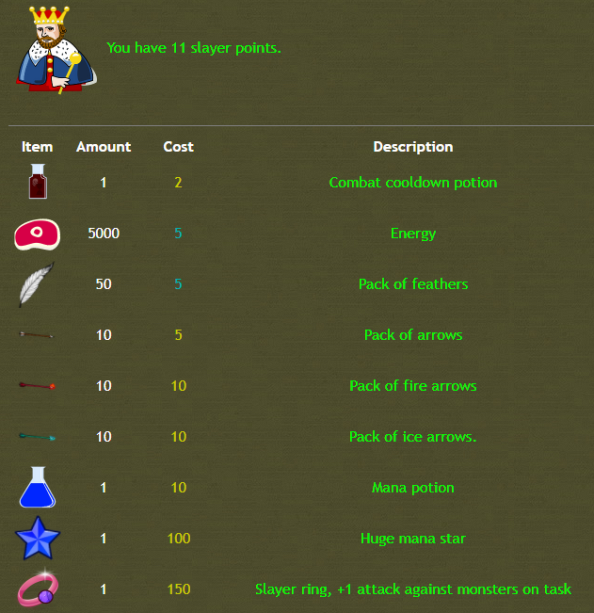 Smitty said that he liked the suggestion, but it wasn't implied yet. It might be working in process and was affected by his schedule lately, no one knows except for himself.

Once a day spawn of resources on combat map

It would bring back some of that idea you had to hide items on maps, that stopped happening after stardust on second map

It is sometimes very annoying that when there are more than 1 type of damage in the same combat tick, hit splats will stack up. So in 2020/08/16, $$ suggested that hit splats should separate like Diamond Hunt 2 did.

In Diamond Hunt Mobile, there are a 1/101 chance of dropping a chest per monster. As chests are getting added to Diamond Hunt 3, ppyt in 2020/08/17 suggested adding them to the monster drop table too. It's such a great moment when you get a rare drop, which keeps you playing.

Diamond Hunt 3 is all about combat, but combat is very very non mobile-friendly, Combat UI on mobile is bad, it is very easy to misclick spells and sometimes buttons and such can stick out of the alignment. The delay in mobile makes battling monsters that can charge a hard thing to do, as timing is needed in which on mobile can't do well.

In 2020/08/17, Smitty jokingly added snow animation to Northern Fields, which makes battling there using mobile really laggy. It can lag to a point where 4-5 ticks happen at once.

The diamond hunt series is supposed to be playable on any device, but due to combat being the main thing in Diamond Hunt 3, progressing using mobile is hard.

"Home" or "Back to top" button for monster log

Combat log is getting longer and longer as more and more enemies are added. In 2020/08/31, Morgan91 suggested that a button should be added when you scroll down for you to get back to top at 1 click.

Community content is available under CC-BY-SA unless otherwise noted.
Advertisement