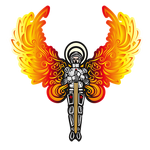 Knight 5 is the final opponent encountered in the Castle. It is a Fire-type Ghost, so you must cast Ghost Scan in order to deal any damage against it. It is thus very important NOT to cast Ghost Scan at any time prior to Knight 5, as the Cooldown will not have time to reset. It is weak to both the Scythe and Ice Arrows. After reaching Half Health (50 HP), it will start to put up Magical Barriers that can be switched on any Tick. These barriers block all Damage from a certain Combat Style, so you should bring at least two styles from: Melee, Ranged, or Magic. It is best to save your Mana to cast Heal, so it is recommended to use Melee and Ranged for the fight. Knight 5 uses a Fire-based Magic attack that deals 0-5 Magic damage (and so neglects your Defence) every 3 ticks. If you manage to beat Knight 5, you will receive 1,000+ Castle Points, as well as the Dungeon Key for your first victory.

The beginning of the fight is relatively straightforward: you should use a Scythe and only use Mana to Heal yourself. When Knight 5 gets to half health, they will start to use their Magic Barriers, each of which provides immunity to one Combat Style:

It can change the barriers on any Tick, so you must pay close attention to switch weapons as needed. It is recommended to use the Scythe against both the Green and Blue barriers, and a Bow with Ice Arrows against the Red barrier. You should still only use Mana to Heal yourself, though Invisibility could also occasionally be used to dodge an attack since it only uses 1 Mana. With the right equipment, the fight is relatively easy and is only difficult if you have low Health or Mana when starting the fight, due to the previous Castle Knights.

Community content is available under CC-BY-SA unless otherwise noted.